On 25th of May, Professor Andrew Gamble from the University of Cambridge was invited by IEF to visit the university, delivered a talk on “Political Challenges in a Changing World” and was awarded as the guest professor of NAU.

Professor Gamble has distinguished achievements in research in the area of political economy. Since January 2007 he has been Professor of Politics at the University of Cambridge and Fellow of Queens' College. In 2005 he was awarded the Sir Isaiah Berlin Award for Lifetime Contribution to Political Studies by the PSA. His 2003 book, Between Europe and America, won the W.J.M. Mackenzie prize for the best book published in political science in 2003. He is co-editor (with the former Labour MP Tony Wright) of the academic journal The Political Quarterly, and he also sits on the editorial board of another academic journal, Representation.

President Yan Weilong hosted a meeting with Professor Gamble at Librairie Avant-Garde. President Yan Weilong introduced the history of NAU, the development of discipline development and especially the contribution of NAU to the auditing discipline in China. During the meeting, they also shared administrative management experience as a university manager and discussed about the possibility of research cooperation and academic exchanges.

After the meeting, professor Gamble conducted a lecture titled “Political Challenges in a Changing World”. All teachers of IEF attended the lecture with a lot of students from the university with great enthusiasm. Professor Gamble stated with the background of the world political and economic situation after the cold war in 1991, expounded the global economic globalization and current situation of the development of Neo liberalism. Then, he introduced four stages, respectively is the stage of the global financial crisis, the European debt crisis stage, the rise of emerging markets stage and the political unrest stage after 2016. He analyzed the impact of government governance, economic growth slow down and increasing sovereign debt on the United States, European, China and other countries and regions. Subsequently, Gamble put forward about four scenarios the future development of the world economy. Professor Gamble explained the profound in simple terms. His logical and rhythmic presentation inspired the audience a lot. Finally, audience interacted with Professor Gamble on recent terrorist incidents, the potential impact of Brexit, and European refugees issues.

President Yan Weilong attended Professor Gamble’s talk and presented the guest professor award after the talk. Professor Gamble expressed gratitude for the invitation. He said he expected to boost mutual cooperation with scholars from NAU. 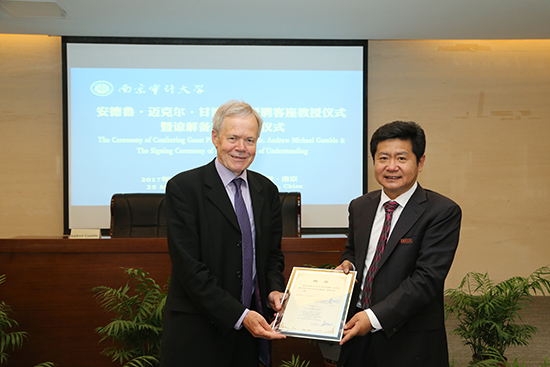