On the afternoon of Nov 16, prof. Michael Alexeev, from the Indiana University, delivered a lecture titled "Institutions and the Allocation of Talent: Evidence from Russian Regions" at Weiyu building 117. Teachers and some students from the IEF participated in the lecture and subsequent discussion.

The professor first introduced the motivation of this article. In some countries the most talented people tend to become wealth-creating entrepreneurs while in other countries they become rent-seekers. The former countries would grow faster than the latter ones. In previous literature, North (1990) and Pritchett (2001) mentioned the difference between wealth creators and rent-seekers: "only chemists create wealth, pirates do not create wealth no matter how hard they try, pirates just redistribute wealth." "The expansion of the school enrollment knowledge has trained more education sophisticated pirates."

Who are the pirates of today's world? According to the professor, the modern "pirates" are those who redistribute wealth, mainly in the professions of lawyers and public affairs. Engineers, by contrast, are those who create wealth. Furthermore, if the institutional system is good enough, people can retain profits and there will be more entrepreneurs in the society to create wealth.

Professors construct career choice models based on individual talent, career preference and institutional quality. The better the quality of the institution, the less it will be exploited by others. Producers can protect their remaining lost benefits by paying a cost. Therefore, we can get the maximization condition of the producer.

The professor reasoned out several propositions from the model. First, given the quality of any institution, there is a unique equilibrium wage and equilibrium talent. Second, as the quality of institutions rises, so does the supply and return of productive workers. In addition, the expansion of property rights protection has increased people's participation in productive activities.

The professor also conducted a placebo test. After the regression of another 100,000 samples from other disciplines, such as economics and management, no significant statistical impact caused by the quality of institutions was found.

The professor concluded that higher quality institutional policies are important for production guidance and investment in human capital. Higher caliber people are more sensitive to the quality of the organization, at least within a range of capabilities. Russia's comparative advantage in human capital will not have much impact on pluralistic economic development and innovation-driven growth unless it urgently improves the quality of its institutions. 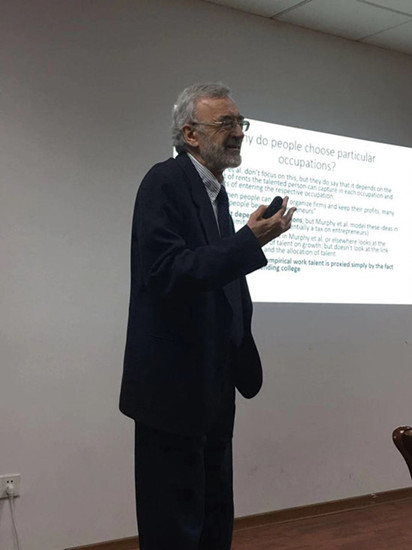